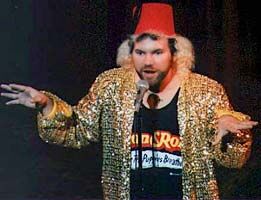 Whatley originally became well known after becoming a producer and contributor for The Ron and Ron Show in Florida. After the show disbanded, Whatley teamed up with Ron Bennington to create The Ron and Fez Show, then titled Ron and Fez Dot Com.

Whatley originally became well known after becoming a producer and contributor for The Ron and Ron Show in Florida. After the show disbanded, Whatley who was formerly a sidekick and producer now teamed up with Ron Bennington as a co-host to create The Ron and Fez Show, then titled Ron and Fez Dot Com. which premiered on New York City radio station WNEW FM on April 17, 2000.

Whatley and Bennington continued on WNEW FM until the end of 2002, as well as being syndicated to several other FM markets around the United States, including WJFK-FM in Washington, DC. After they went off the air in New York City, as well as most of the other markets, they continued to broadcast from WJFK FM, relocating to DC.

On July 19, 2004 Whatley and his longtime pal Ron Bennington returned to the Florida airwaves, airing in the 1 PM to 3 PM slot on Tampa Bay, Florida's The Buzz WBAA-AM 1010 after the station adopted a new talk format, and abandoned its former sports talk format.

The Ron and Fez Show moved to XM Satellite Radio on September 12, 2005 after leaving WJFK 106.7 FM in Washington D.C.

Whatley graduated from Pinellas Park High School in Pinellas Park, Florida in 1982, and received a publication award from the International Thespian Society.

Whatley suffered a mild heart attack on November 9, 2005 which he did not recognize. He went on to host The Ron and Fez Show the next day before consulting a doctor where he was informed he had suffered a heart attack and was also diagnosed with diabetes. An angioplasty was performed and Whatley returned to the show on November 28, 2005. Approximately one year later, Fez left the show again due to chest pains, and needed a second stent put in.

On February 24, 2011, Fez's father, Dick Hillier died in a NYC hospital. Ron Bennington was on-air the next day and in Fez's absence put on an impromptu radio memorial for Fez's father going to break playing Danny Boy. Fez returned to the air on Monday, March 7, and offered a touching remembrance of his father.

On February 24, 2012, Fez came out as gay. Fez had been playing a flamboyant character on the air for more than 20 years, but became increasingly uncomfortable in the role after recognizing his sexual orientation and being unable to publicly embrace it. After admitting his sexuality to his co-host Ron Bennington three years earlier, Fez spoke openly on the air about his issues as a closeted man, referring to his "secret," but had remained unable to say it directly. He chose to come out on the one-year anniversary of his father's death.

Fez has performed the following characters and impersonations throughout his career.

Things that have made Fez cry[]

Community content is available under CC-BY-SA unless otherwise noted.
Advertisement